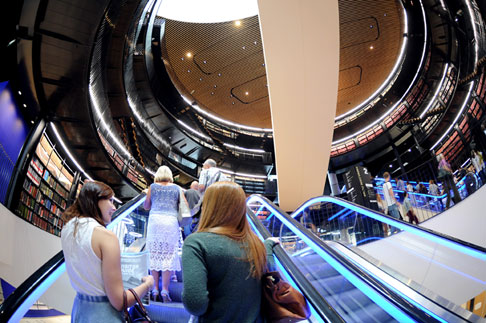 The Library of Birmingham has won awards in three categories in this year’s Royal Institute of British Architects (RIBA) regional awards. The £188 million development incorporates a lighting management system installed by zencontrol that optimises energy efficiency and can be configured in many different ways. The system supplied also manages emergency lighting, which comprises of specially finished LED emergency luminaires.

The lighting management system was required to meet a range of criteria, including optimising the energy performance of the lighting, integrating the management of general and emergency lighting and providing the flexibility to control individual luminaires. The project incorporated a number of features that would not be found in a standard lighting controls project which included:

Designed to achieve a BREEAM ‘Excellent’ rating, the library will play an important role in helping Birmingham City Council reduce carbon emissions by 60% before 2026.